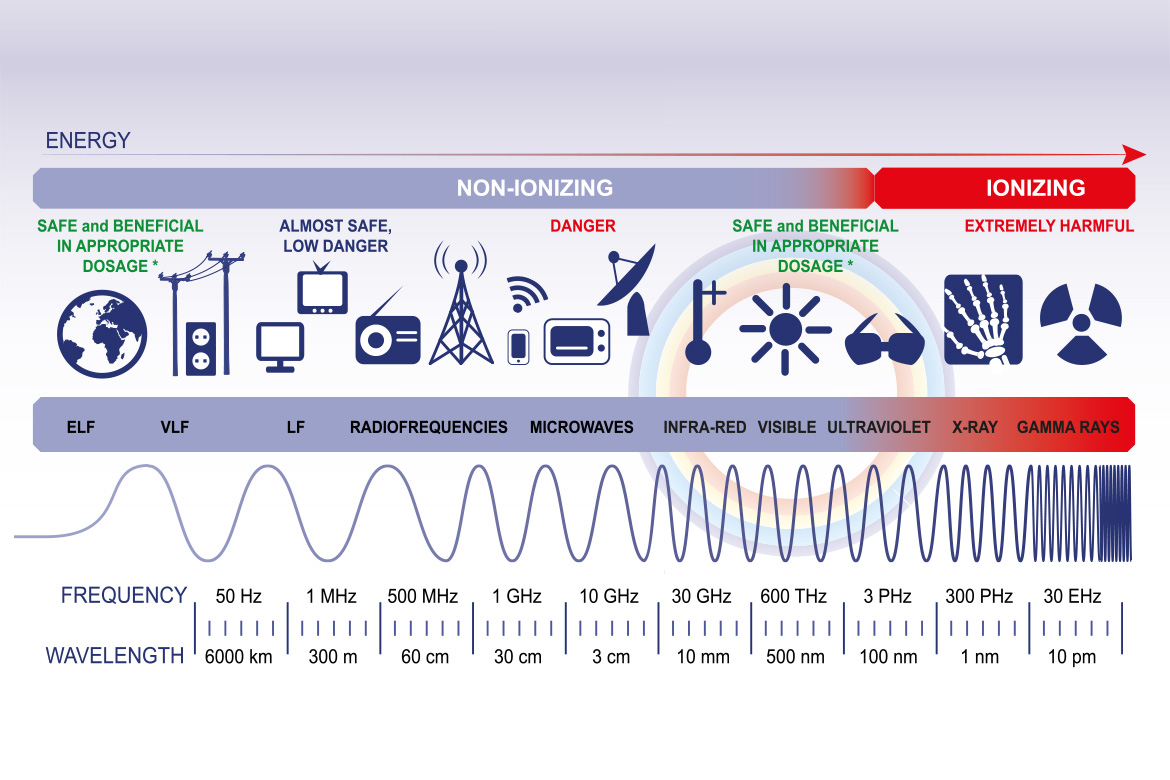 How mobile phones radiate and what is non-ionizing electromagnetic radiation

The development and implementation of the new generation of 5G mobile telephony, the popular 5G network, is a burning issue. How many times have you read texts or watched video on this topic and wondered if all this makes sense and what is it really about?

I understand you. And yes, you are right, there are so many texts that are based on unverified, inaccurate and unscientific information. Let’s put all that aside now and talk about this topic in facts.

First, what is electromagnetic radiation (EM)?

The electromagnetic spectrum represents all possible wavelengths of electromagnetic energy (including visible light), but most of them are invisible to us. It ranges from extremely long wavelengths such as those from power lines, over radio, TV and mobile phones’ wavelengths, to very short wavelengths like in infrared, visible, and ultraviolet light spectrum. Extremely short wavelengths belong to X-rays and gamma rays and include both non-ionizing and ionizing radiation. Wavelength is inversely proportional to frequency of the wave (EM waves with shorter wavelength, have higher frequency and carry higher energy).

We are constantly exposed to different electromagnetic radiation. This radiation is an integral part of nature, our environment and our lives. Solar radiation is the basic EM radiation essential for the life on Earth. EM radiation is also emitted by Earth and various types of radiation from the cosmos arrive to Earth.

It should also be kept in mind that crystals (natural minerals) as well as any of our thoughts, feelings and desires have their own frequency range

The man has found way to produce EM waves in all parts of the EM spectrum and put them into use.

The mobile phone is just one example of the use of EM waves.

What we should  know about mobile telephony?

Mobile telephony transmits voice and data through EM waves that broadcast and receive antennas on base stations and mobile phones. When the base station is far away, the phone receives poor signal and the phone radiates full power so that base station “can see it”. During on-the-go telephony, the device exchanges data with one or more base stations.

What is more important to know?

It is interesting  that most people think that they are exposed only to radiation of the 5G, 4G, 3G, 2G base stations and that phones itselves do not radiate.

The level of base stations’ radiation  is under strict state control. Also, mobile phone manufacturers are required to specify the maximum values of the specific rate of electromagnetic radiation absorption (SAR) emitting from the phone in the instructions for use. European and national regulations designate 2W/kg as the SAR limit for localized head and torso. Most phone manufacturers allow you to check SAR for your device on official websites in case you have lost your manual.

Modern  life is hard to imagine without mobile phones and most people do not think about whether and how much these devices emit radiation.

This was also demonstrated by the research supported by the European Union LEXNET Project, from November 2012 to October 2015, in which Telekom Serbia participated together with the Faculty of Electrical Engineering, University of Belgrade.

Seventeen leading telecommunications operators, vendors, research centres and academic institutions have launched the LEXNET project (Low EMF Exposure Networks), a research project supported by the European Commission under the FP7 work program, to develop effective mechanisms to reduce 50% (at least) of the public exposure to EMF, without compromising the quality of service. For more information visit: http://www.lexnet.fr/

More information from the LEXNET project participants can be found on news site B92 “How much do mobile phones “radiate” and how can we protect ourselves?“

One of the results of the LEXNET project showed that the mobile phone user receives higher dose of radiation when the phone signal is weak in comparison with the dose that user can receive from the base station during several years.

Does the mobile phone radiate even it is not used?

Yes, but to a lesser extent than in the active mode. Phone occasionally emits certain signals to the base station to stay connected with network. Applications on smartphones occasionally communicate with their servers even if you are not using them.

The World Health Organization has listed cell phone radiation as one of the possible causes of cancer, group 2B. For more information IARC PRESS RELEASE N° 208(PDF)

International organizations, such as the World Health Organization and the International Commission on Non-Ionizing Radiation Protection, are concerned with the impact of EM radiation on humans.

In the last decades, tens of thousands of scientific articles on this subject have been published. For more information, visit:

How to smartly use a mobile phone

Among other things, it is advised by WHO (World Health Organization), that children under the age of 10 use mobile phones only when it is absolutely necessary.

In order to protect our bodies from negative effects of EMFs and to provide safe use of mobile phones, we have developed and scientifically tested Perun PROTECTOR in the European Union.

Perun PROTECTOR strengthens and harmonizes your biofield and reduces the negative biological effects of non-ionizing electromagnetic radiation emitted from various sources such as base stations 5G, 4G, 3G… mobile phones, tablets, computers, WiFi routers, smart watches, wireless headphones and other wireless communication devices. It prevents further accumulation of electrosmog in your body and allows undisrupted flow of bioenergy throughout the body. Based on that, negative consequences caused by excessive exposure to EM radiation are reduced.

Our product is optimized for easy application on your electronic devices (laptop/mobile phone/tablet).

The protector does not reduce the radiation of the mobile phone and other wireless communications devices. Otherwise, devices would not  function properly. Perun PROTECTOR strengthens and harmonizes human biofield.

Use your mobile phone wisely and order Perun PROTECTOR  here

The Center for Nutrition and Bioresonance is not Healthcare Center and does not offer medical testing services. All tests and all activities are aimed exclusively for improving the physical condition and good mood of clients. The advice and recommendations received do not replace a medical diagnosis or therapy.

© Copyright 2019-2022 Perun PROTECT, All rights reserved.
By browsing our website, you agree that we may use cookies that are intended for your better user experience on our website. For our own analytics needs, we use Google Analytics, which sets cookies for this purpose . More info
Accept
Manage consent

This website uses cookies to improve your experience while you navigate through the website. Out of these, the cookies that are categorized as necessary are stored on your browser as they are essential for the working of basic functionalities of the website. We also use third-party cookies that help us analyze and understand how you use this website. These cookies will be stored in your browser only with your consent. You also have the option to opt-out of these cookies. But opting out of some of these cookies may affect your browsing experience.
Necessary Always Enabled
Necessary cookies are absolutely essential for the website to function properly. These cookies ensure basic functionalities and security features of the website, anonymously.
Functional
Functional cookies help to perform certain functionalities like sharing the content of the website on social media platforms, collect feedbacks, and other third-party features.
Performance
Performance cookies are used to understand and analyze the key performance indexes of the website which helps in delivering a better user experience for the visitors.
Analytics
Analytical cookies are used to understand how visitors interact with the website. These cookies help provide information on metrics the number of visitors, bounce rate, traffic source, etc.
Advertisement
Advertisement cookies are used to provide visitors with relevant ads and marketing campaigns. These cookies track visitors across websites and collect information to provide customized ads.
Others
Other uncategorized cookies are those that are being analyzed and have not been classified into a category as yet.
SAVE & ACCEPT