Iris flower worthy of the Gods 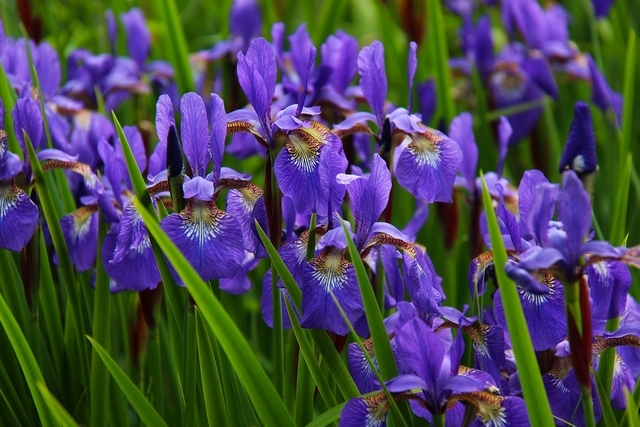 It’s time for an iris

If the old legend is to be believed, the very place where Perun, the supreme god of the Old Slavs, throws his lightning and where the rainbow touches the earth, is the place where the iris is born. So it is not surprising that the iris can  be described as the flower worthy of gods.

Even the name Iris germanica is in direct connection with the Greek goddess Irida, who transmitted the messages of the gods from the heavenly heights and roamed the sky with a rainbow. Therefore, this flower represented a kind of magical connection between heaven and earth.

Thanks to such a powerful legend, the iris has become a symbol of hope, faith and deep respect.

Many royal families used this flower as a kind of personal symbol. Fleur-de-lis thus became the national symbol of France, and the iris, along with lilies, became the most frequently used flower in heraldry. Also, we can add a part of the Asian tradition that recognizes iris as a symbol of the so-called blue blood. In Japan, it is a symbol of victory. It is interesting that in the Far East, iris is also taken as a powerful flower of defense, which not only protects the home and the household from negative energy, but at the same time defends the person inside, ennobles the soul and relaxes the body.

The appearance of the iris itself is also associated with openness and clarity. The leaves bear the sharpness of a sword and are a clear sign of sharpness, and a flower that hides almost nothing is a symbol of truth and sincerity.

Don’t close your eyes to the truth – it says iris, a flower of hope, wisdom and friendship.

Maybe now an iris will be your first choice when you want to communicate a message to someone.

The Center for Nutrition and Bioresonance is not Healthcare Center and does not offer medical testing services. All tests and all activities are aimed exclusively for improving the physical condition and good mood of clients. The advice and recommendations received do not replace a medical diagnosis or therapy.

© Copyright 2019-2022 Perun PROTECT, All rights reserved.
By browsing our website, you agree that we may use cookies that are intended for your better user experience on our website. For our own analytics needs, we use Google Analytics, which sets cookies for this purpose . More info
Accept
Manage consent

This website uses cookies to improve your experience while you navigate through the website. Out of these, the cookies that are categorized as necessary are stored on your browser as they are essential for the working of basic functionalities of the website. We also use third-party cookies that help us analyze and understand how you use this website. These cookies will be stored in your browser only with your consent. You also have the option to opt-out of these cookies. But opting out of some of these cookies may affect your browsing experience.
Necessary Always Enabled
Necessary cookies are absolutely essential for the website to function properly. These cookies ensure basic functionalities and security features of the website, anonymously.
Functional
Functional cookies help to perform certain functionalities like sharing the content of the website on social media platforms, collect feedbacks, and other third-party features.
Performance
Performance cookies are used to understand and analyze the key performance indexes of the website which helps in delivering a better user experience for the visitors.
Analytics
Analytical cookies are used to understand how visitors interact with the website. These cookies help provide information on metrics the number of visitors, bounce rate, traffic source, etc.
Advertisement
Advertisement cookies are used to provide visitors with relevant ads and marketing campaigns. These cookies track visitors across websites and collect information to provide customized ads.
Others
Other uncategorized cookies are those that are being analyzed and have not been classified into a category as yet.
SAVE & ACCEPT